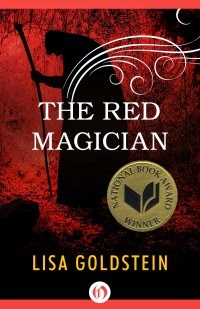 The feud is the talk of the town, but the evil that’s about to descend on Kicsi’s family and friends will make the skirmish between the two magicians seem unimportant.

When you look at bookshelves today, it’s easy to forget that, once upon a time, fantasy novels didn’t have to be four or five inches thick. At just 144 pages, “The Red Magician” would have trouble finding space on shelves these days. Instead, it would likely be turned into a trilogy of 400-plus page books with the first focusing on Kicsi’s meeting with Voros, the second on the concentration camps and the third on what comes after. It would also destroy some of the simple charm of Goldstein’s tale.

“The Red Magician” does move fast, on occasion a little faster than I might like things to go, but that pace also pulls the reader along and gives it more of an adventurous feel. A year in a Nazi concentration camp takes only a couple of dozen pages to cover, but we’re no less aware of the sense of hopelessness and the daily misery of the camp’s inhabitants than we would be if the experience had been explored in grim and gritty detail.

The pace of the story is also fitting for the speed of Kisci’s maturation process through its telling. We are able to witness her growth through the eyes of its phases – a young girl for whom the outside world is filled with wonder, a survivor simply trying to make it through a horrific existence and a young woman who is sadder and wiser, but is also able to rediscover a spark of what she had before her ordeal.

In the end, it’s the simplicity and wonder of Goldstein’s tale more than anything that makes it truly magical.