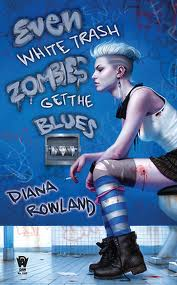 But as with most things in Angel’s life, that peaceful existence can’t last for long. A mysterious death at a local research lab rocks her world after the body that she’s delivering to the morgue is stolen from her at gunpoint. The event puts Angel in the headlines and pulls her deeper into the complicated politics of the zombie world.

I admit that I was reluctant to pick up “My Life as a White Trash Zombie,” and it was only on the recommendation of another favorite author, Kevin Hearne, that I did. When I was finished, I was glad that I had. After finishing “Even White Trash Zombies Get the Blues,” I’m very much looking forward to diving into the third volume.

Angel remains an incredibly fun character. She’s a tough chick that knows how to kick ass, especially when she’s tanked up on brains. Her smart aleck attitude is endearing rather than annoying, which can sometimes be a problem for characters with that trait. But she’s also still a bit unsure of herself both as a zombie and in life, and that’s very relatable for most people, too.

A Louisiana setting also usually gets my attention. Though the Cajun country backdrop for this doesn’t hit as close to my northern Louisiana home as Charlaine Harris’ Southern Vampire series, there are certainly comparisons to be made in the tone of the books. I think Rowland’s are better written, and Angel, at least for me, is a more relatable character than Sookie.

“Even White Trash Zombies Get the Blues” delivered exactly what I was looking for – a quick and entertaining read that was loads of fun. I laughed a lot. I had plenty of excitement. I was horrified at a couple of points and also touched at a couple of points. That’s about all you can ask from a book about a white trash zombie.