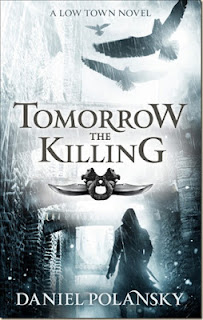 No, Daniel Polansky’s “Tomorrow, the Killing” (Hodder & Stoughton) hasn’t been released in the U.S. yet, but after enjoying the first book, “Low Town,” immensely, I got tired of waiting.

“Tomorrow, the Killing” returns us to the world of The Warden, a one-time war hero and government agent turned drug dealer. The Warden is king of the walk in the part of the city known as Low Town, but his past is about to come back to haunt him. He gets a call from a former general whose daughter has gone missing in Low Town. She went there to investigate the death of her brother, Roland, The Warden’s former commanding officer and head of the veteran’s association, a victim of a political murder when his ambitions became a little too big.

Meanwhile, the veteran’s association is cranking its efforts up again. The government has reneged on a promised payment to veterans, and the association is planning a march to protest. The Warden’s friend and co-owner of his tavern, Adolphus, has gotten heavily involved, which gives him some concerns.
He also has to deal with his ward, Wren, whose burgeoning magical abilities need to be controlled – and hidden from the state, which has set up a system to control and use all magic-users.

The events lead to The Warden doing what he does best, setting things in motion. But when the dominoes start to fall, he and those around him may find themselves trapped under them.

In “Low Town” – or “The Straight Razor Cure” in its original UK version – The Warden could perhaps be described as an anti-hero. That is, if you were feeling charitable. In “Tomorrow, the Killing,” his actions and attitudes make him an even less likeable person, though no less compelling a character. There’s no “hero” in him, to be sure, and even the moments where he even appears to be a human being are few and far between. Though he occasionally has a noble thought, the actions he takes in response to it are anything but, still you can’t help but pull for him.

Low Town itself is a colorful place, even if most of those colors are the red of blood and shades of even less pleasant things. It’s a gritty, ugly place where life can end in an instant and pretty much anything can be had for a price – anything except for perhaps a long, happy lifetime. As with the first book, Polansky has only scraped another small sliver of the grime off here to show us what’s beneath.

As with “Low Town,” the fantasy element is largely muted in favor of the noir feel, though Wren’s magical training offers an interesting teaser to perhaps more to come. Removing that aspect, the book could have been a real-world crime novel and would have been just as entertaining.

In the end, I enjoyed “Tomorrow, the Killing,” but not quite as much as the first book. This one had the feel of a transitional book to me. A lot happened in a relatively short time, and the results leave The Warden’s life perhaps even more unsteady than it was before. In the aftermath, there are a lot of questions left unanswered, and a lot of intriguing facets for Polansky to explore in the future.