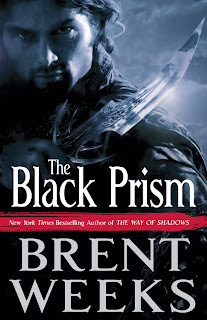 With “The Black Prism” ($7.99, Orbit), Brent Weeks delivers a tale that will have some familiarity, but a very different tone for fans of his Night Angel trilogy.

Weeks introduces us to Gavin Guile, The Prism, which basically means that he’s the most powerful magic user in the world, an emperor by title, though not necessarily in the traditional sense.

Guile knows exactly how much time he has left to live. Prisms tend to rule in multiples of seven years, and he’s working on his third set of seven, an unusual length of time. He has great purposes planned out for the things that he’ll achieve, but his life is thrown into chaos when he learns that he has a bastard son in a backwater satrapy that has been neglected since he battled his brother Dazen there in the Prism’s War.

When he travels to the town, he’s plopped into the middle of another war. A leader of one of the smaller satrapies, Rask Garadul, is raising an army and has proclaimed himself a king. When Gavin arrives, Garadul has destroyed the town for refusing to pay tribute, and murdered everyone in it – save Gavin’s son, Kip, who is on the way to meeting his end. Gavin steps in, saves the boy, thus starting a war with Garadul, and returns to the Chromeria, where Kip will learn magic. But the war isn’t the only thing that threatens to tear the world apart.

One of the more intriguing aspects of “The Black Prism,” is the magic system that Weeks creates. The drafters create a colored substance called luxin, and each of the different colors have different properties. Most drafters can only create one color, a few bichromes can control two and a very few polychromes have more. Only the Prism can control all the colors, and the belief is that there’s only one in existence at a time. That belief, though, was tested by Gavin and Dazen.

Each drafter has a finite amount of magic available. The more they use, their eyes fill up with their color. When the color shatters the iris, called “breaking the halo,” the drafters become color wights, beginning a descent into madness that aligns with the nature of their color. Gavin hunts and destroys color wights, but Garadul is recruiting them for his army.

It’s an interesting take on magic, and not quite like anything that I’ve seen before. That alone makes the journey worth it for me. But there’s also a pretty good start to a story here, with a lot of politics, intrigue and secrets flying around.

Kip will be a familiar character for fans of the Night Angel trilogy, a bastard orphan who is neglected but seemingly destined for great things. Beyond that similarity, though, “The Black Prism” has a very different tone. There’s more wonder in this book, and though it certainly has it’s darkness, it’s quite often more light-hearted than the Night Angel books.

I won’t say this book grabbed me in quite the same way that “TheWay of Shadows” did when I first picked it up, but I quite enjoyed it, and it provides a good setup for what promises to be an intriguing tale.