Review: "The Capture" by Kathryn Lasky 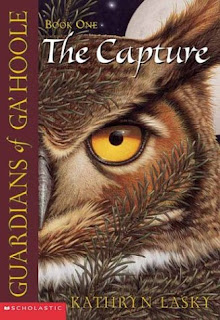 My son and I have discovered a few bedtime reads lately via movie adaptations. The latest is Kathryn Lasky’s “The Capture” ($5.99, Scholastic).

My son first saw “Legend of the Guardians” in the theater with his grandmother, and for the past six months, I’ve been hearing how “awesome” it was. We finally rented it on Blu-Ray a month or so ago, and I found that I had to agree with him. Both of us were eager to dig into the books.

Like most adaptations, the movie and book are quite a bit different. It wasn’t nearly as different as one of our last book-to-movie reads, “How to Train Your Dragon,” but still not an entirely faithful adaptation. For one thing, “The Capture” only covers the very beginnings of the movie. I’m assuming that the movie covers an overarching story line from all or at least several of the books.


In “The Capture,” the barn owl Soren is kicked out of his nest by a nasty older brother named Kludd. There’s the first departure from the movie, in which the fall was accidental and Kludd went bad after being brainwashed. In this one, he’s a pretty nasty piece of work from the start.

Soren is captured by owls from St. Aegolius Academy for Orphaned Owls. There, he meets Gylfie, an elf owl, and together they try to avoid being brainwashed by moon-blinking, which requires a shuffling sleep pattern beneath the full moon, and also attempt to unravel the sinister plot being hatched at the academy.

The story in these 240 pages moves at a much more leisurely pace than the movie, in which these events whiz by. At the book’s end, Soren and his friends – Gylfie, Digger and Twilight, along with the nest maid snake Mrs. Plithiver – have only just begun their journey to Hoolemere and the Great Ga’Hoole Tree where the guardians live. Despite the slower pace, though there’s still plenty of action to hold the interest of young readers. While I thought the book might be moving a little too slow for my son, he was eager, when we finished, to begin the second volume immediately.

Lasky’s book offers a deeper look into the society of the owls than we get in the movie, and the conclusions in the books are not always as nice or happy as in the film. There are some scary moments and themes in the book, including a few violent scenes and the overall story of being betrayed by your brother and stolen away from your family. It’s probably a book a parent should read first and approach with a realistic idea of what your child is ready for.

My son and I found “The Capture” quite enjoyable, a bit darker, but also a bit more noble than the movie. We’re looking forward to continuing the journey with Soren.