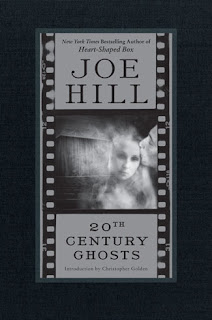 I have to admit that I’m rapidly becoming a Joe Hill fanboy. He first impressed me several years ago with his debut novel “Heart-Shaped Box,” which ranks as one of my favorite horror tales ever, and a few weeks ago, I enjoyed his latest novel, “Horns.” That led me, naturally, to the only other book Hill has in print, “20th Century Ghosts” ($13.95, Harper), a collection of short stories.

I admit that I’m not normally a fan of short story collections, but the tales in this book endeared me to Hill’s work even more. I’m reluctant to make the comparison, for obvious reasons, but reading “20th Century Ghosts” reminded me a lot of reading Ray Bradbury’s “The October Country” for the first time. Like my favorite Bradbury collection, there’s plenty of weirdness and creepiness in the pages of these stories, but there’s also a good mix of wonder, sweetness and observations on human nature.


In fact, there’s very little horrific in the best tale of the bunch, “Pop Art,” unless you count the main character’s bastard of a father (which you have to). It starts with the entirely absurd notion of an inflatable person and his best friend. For a short time, you’re waiting for the punchline, so to speak, the twist to the tale. Soon, though, you realize that Hill’s writing seriously about something completely impossible – a person that was born inflatable. By the latter part of the story, not only has the author convinced you of the realness of this person, he’s also made you care very deeply for him. In the end, it’s a touching tale that’s far removed from the expected.

Another favorite of mine is of a darker nature. “The Cape” tells the story of a young boy who discovers briefly that his favorite blanket gives him the superpower of flight and what happens many years later when he rediscovers it in his mom’s closet.

Much like his father, Hill weaves baseball into several of the stories in the collection. The most notable example being “Better Than Home,” which explores the relationship between a child with challenges and his baseball coach father who is a notorious hothead on the field, but may be the only person who understands the boy.

There’s a romance story in “Bobby Conroy Comes Back from the Dead,” albeit a slightly bloody romance between two made-up extras on the set of George Romero’s “Dawn of the Dead.” He even pokes a little fun at his own genre in the opening tale, “Best New Horror.”

Of course, for those looking for the bizarre and creepy, there’s plenty of that to be found in this book as well. The horrors range from real-world monsters like child predators (“The Black Phone”) and abusive fathers (“Abraham’s Boys”) to the supernatural. The two best of the bunch for me, though, are “Voluntary Committal” and “My Father’s Mask.” In the first, a man tries to find the answers to the disappearance of his brother from a mental institution, which leads him to the memory of a friend who disappeared when they were younger and his brother’s strange basement mazes constructed from cardboard boxes that were much more than they seemed on the inside. “My Father’s Mask” is just a downright strange tale of a teenager who is taken to a camp on the lake by his parents under the pretense that “the playing card people” are after them, and the disturbing events that follow.

As with Bradbury’s collection, the stories here often leave the reader wondering and ask more questions than they provide answers. It’s a reminder that, sometimes, the best tales are those that don’t wrap things up neatly for you, but rather leave the reader to seek his own conclusions.

Hill will be (rightfully, in most cases) stuffed into the horror category, and he also has to carry the baggage of his dad’s legacy. Though he tried to avoid it by dropping the King and shortening his middle name from Hillstrom to Hill, it hasn’t been a very well kept secret. That’s a combination that will likely cause some to dismiss Hill’s work out of hand, but they’ll be the ones missing out. Like the stories of “The October Country,” Hill’s transcend genre and usually offer keen insights into the human condition. Hill deserves to be judged on his own merits, and those who do that will discover one of the best writers working today.

Oh, by the way, don’t quit reading when you get to the acknowledgements at the end. You’ll miss something if you do.