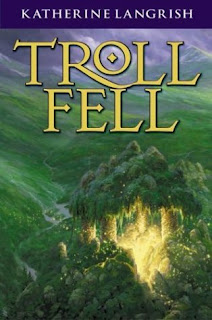 Katherine Langrish's "Troll Fell" ($15.99, HarperCollins) starts the way so many books geared for children begin - with the death of a parent and adoption by cruel relatives.

In this case, Peer Ulfsson is snatched away while his father's funeral pyre is literally still burning by his two brutish uncles, Grim and Baldur Grimsson. He's taken to their mill near Troll Fell - the same mill his father ran away from as a young man - and put to work. Peer's uncles smack him around, make him do all the work, feed him very little and entertain themselves by threatening to have their monstrous dog, the appropriately named Grendel, eat Peer's dog Loki.

The only thing that brightens Peer's time at the mill is stolen moments with Hilde, the girl who lives up the hill. But he has to be careful. His uncles and Hilde's family have a bitter rivalry, and if he gets caught talking to her, there's sure to be swift and terrible punishment.

The uncles have other plans for Peer as well. The trolls in Troll Fell are planning a big wedding, and the Gaffer has offered the Grimsson brothers some of his famed troll treasure in return for a human servant that his daughter can present as a gift to her husband-to-be. When the troll ceremony becomes a double wedding and the Gaffer makes another demand of the Grimssons, things get really interesting.

Langrish's book probably won't have the crossover appeal for kids and parents that other series, like "Harry Potter," have. The story is a bit too cut and dried, and perhaps a bit predictable for adults, though there are a few interesting twists. Then again, it's not intended for adults. For the younger crowd, it's probably just what they're looking for.

The action begins with the opening sequence and doesn't stop until the end. Wonderful and strange creatures fill the book - wicked Granny Green-Teeth who lives at the bottom of the mill pond, trolls of all shapes and sizes and the Nis, which reminds me a lot of Dobby the house elf.

Though Langrish makes clever use of Norse mythology in the story, as you can tell by the names, the tale is not dependent on it in any way.

Langrish's debut novel is a simple tale, but it's still a lot of fun. "Troll Fell" is also a great way to keep young readers occupied until the next installment of a certain wizard's tale arrives.