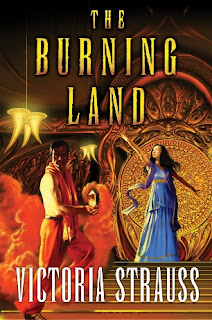 Strauss' two tales about a segregated world where magic and technology were at odds with each other took an old idea and gave it a surprisingly original spin, announcing the arrival of a big new talent. Then she seemed to disappear for a while.

Now, almost five years after the publication of "Garden," Strauss returns with her first hardcover (if you don't count the now out-of-print children's books she wrote before "Arm"), "The Burning Land" ($24.95, Avon EOS). I'm happy to report that she hasn't lost anything during the layoff.

In theme, "The Burning Land" will remind readers of her earlier two books - two beliefs at war with each other and the people caught in the middle - but when it comes to offering insight on human nature and emotion, this book is very much superior.

"The Burning Land" tells the story of a land that has survived 75 years of war between the traditional religious leaders, the Aratists, and the atheist Caryaxists. The Aratists have just been returned to power and now seek to bring back the followers of Arata who were exiled.

A young Aratist named Gyalo is chosen to lead an expedition into the Burning Land, the inhospitable sacred resting place of the god Arata, to bring back a group of refugees who are suspected of having survived by breaking their vows to the church and using their Shaper magic to create a home in the unforgiving desert. What Gyalo finds in the city of Refuge in the center of the Burning Land will rock the Aratist faith to its very foundations - if he can make the church's leaders accept its truth and move beyond their own fears.

Like Strauss' "Arm of the Stone," this book starts slowly, with the telling of a traditional tale from her world. Strauss eschews the "rule" that says you have to start your story by putting the reader in the middle of the action, and she gets away with it because of her compelling writing style.

In addition to being an intriguing story, Strauss offers some thought-provoking nuggets about religion, blind faith and the fallibility of the humans who wield the power in most religions. In a lot of ways, it's a very timely story that parallels some current issues in our own world.

"The Burning Land" works well on two levels - as its own story and as an intriguing setup for a future tale. The book leaves many more questions than it answers and makes me look forward to the follow-up.

After reading her first two books, I was disappointed that Strauss didn't ascend to the top ranks of the fantasy field. Maybe this tale will put her there.