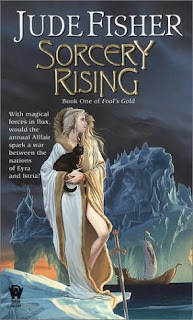 All great stories have to start somewhere, and Jude Fisher's "Sorcery Rising" (DAW) lays a solid foundation for a good story to come. Fisher, who has also written the visual companions to the first two installments of "The Lord of the Rings," makes a promising fiction debut with the beginning of a series called "Fool's Gold."

"Sorcery Rising" opens on a world that's currently at peace, but is always teetering on the edge of conflict. The Istrians from the south have conquered most of the world, driving the Eyrans into a small area in the far north. Though the two nations have declared peace, there is still a great deal of animosity between them, from cultural differences to old grudges. But for the week of the Allfair, they have to get along.

Katla Aransen is a free-spirited Eyran, excited about her first Allfair. On arriving, she immediately makes waves by climbing a rock that is sacred to the Istrian's god - an offense punishable by burning. But that's far from the last strange happening of the celebration.

For some reason the magic of the Footloose - a nomadic gypsy-like people - is working far better than it should. A strange albino named Virelai - traveling with a young woman who casts a spell on every man she meets and a cat with a wealth of magical knowledge - has joined the wandering people. At the fair, he offers gold nuggets, along with a map to the place they were found, to several adventurous people. All they have to do to claim the treasure, he says, is find the island and deal with the old man that lives there.

The fair ends in chaos with a murder and Katla's capture and condemnation, threatening to send the two nations to war again.

With "Sorcery Rising," Fisher has laid the groundwork for what could be an explosive story. She's created a world balanced precariously on the edge of chaos. The Istrians bear a great resemblance to the Islamic radicals we've become so familiar with recently, while the Eyrans are free-wheeling. There's a natural tension between them that borders on open hostility.

Fisher has also created an intriguing cast of characters, each with his or her own story to tell.

Despite all its promise, though, "Sorcery Rising" is a bit unsatisfying. Fisher covers a lot of ground, but tells very little of the story. Almost all of the book's storylines are left dangling, and the lack of any kind of resolution is a little annoying. It's a common practice in fantasy, but having been burned in recent years by seemingly endless series like Robert Jordan's "Wheel of Time," I find it disappointing.

Still, I have to give Fisher the benefit of the doubt. The story begun in "Sorcery Rising" is compelling, the characters are charismatic and the world is an interesting one. It leads me to believe that there are good things to come from this series.
Posted by Fred Phillips at 10:23 PM
Labels: Book reviews, Fantasy, Jude Fisher, Magic