Review: "The Pictorial History of Baseball," by John S. Bowman and Joel Zoss 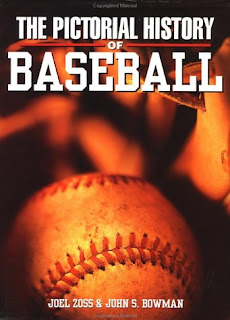 For many baseball fans, this week is one of the best of the season. In Tuesday's All-Star game, arguably the best players the sport has to offer will be on display in one place. So what better time to take a look at a book that illustrates some of the highest (and lowest) moments in the sport's history?

John S. Bowman and Joel Zoss' "The Pictorial History of Baseball" ($24.98, Thunder Bay Press) is a great read for the casual baseball watcher or the hardcore fanatic.

The first thing that strikes you about this volume of baseball lore is the fact that it's a gorgeous book. The hefty tome measures 14 1/2-by-10 1/2 inches and weighs a solid five pounds. Its 256 glossy pages, feature about 320 photographs from all eras of the sport. That's enough to make any bibliophile flip.

Open the book up and you'll find a complete history, from the ancient Egyptian games that were the earliest ancestors of baseball to the sport's role in the wake of Sept. 11. The account is perhaps not as in-depth as some others, which focus on smaller segments of the game's past, but it covers a lot of ground.

As the title suggests, though, the real star of the book is not the written portion, but the photos. They present a visual account of how the game has changed since the first professional teams took the field in the 1800s. A quick glance at two contrasting photos - a very serious-looking Boston team in 1874 (page 19) and a light-hearted moment for the 1984 world champion Detroit Tigers (page 217) - speaks volumes about the differences time has made in the game. But baseball fans will find similarities in the two pictures as well.

The photos from the first half of the book are mostly posed shots, which also hint at the photographic technology of the time. But those shots do have something valuable to offer the baseball fan - faces to put with some legendary names.

That's not to say there aren't a few gems among the photos. One that stands out is a shot of Hall-of-Famer Mickey Cochrane stretched out, lunging with the ball to make a play at the plate. This shot is given a two-page spread, and certainly deserves it.

There are also some interesting stories and characters that some fans might not be familiar with, like Mordecai "Three Finger" Brown, whose missing finger certainly wasn't a handicap. Instead, it helped him to six consecutive 20-win seasons, in which he led the Cubs to four pennants.

The book covers all of baseball's most glorious moments - the best sluggers, the most revered pitchers, the greatest dynasties. But it doesn't ignore the dark side of the sport - the Black Sox scandal, the initial treatment of Jackie Robinson, labor disputes and drug issues all get their mention, too.

Due to the ambitious nature of the project, neither the good nor the bad really get the space and depth they deserve, but Bowman and Zoss do manage to pack them all in.

One of the most interesting chapters of "The Pictorial History of Baseball" has nothing to do with the professional game, though. With the rich history of the pro game on their palette, the authors could have easily ignored youth baseball. Instead, they devote six pages to Little League and American Legion baseball. Again, the book offers only sketchy details on the history of these organizations, but it's a testament to the true spirit of baseball - not today's game of millionaires.

"The Pictorial History of Baseball" probably won't satisfy the rabid fan that wants an in-depth study of the details of the game. It does, however, provide a glimpse of the rich history of the sport and what it's meant to American culture - and in a beautiful package that no baseball fan should be able to resist.
Posted by Fred Phillips at 10:26 PM
Labels: Book reviews, Nonfiction