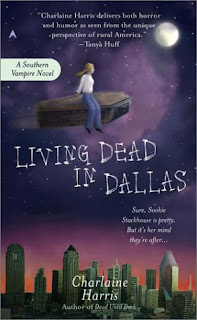 Could vampires be lurking in my neck of the woods?

In Charlaine Harris' latest novel "Living Dead in Dallas" (Ace), the place is absolutely overrun with them.
Since synthetic blood was introduced, vampires no longer have to feed on humans. Now, they've gone public, and not everyone is happy when these creatures of legend come to life.

Sookie Stackhouse works at a bar in the fictional town of Bon Temps - which based on geographical clues, I guess is somewhere near Ruston. She's also a psychic with a vampire for a boyfriend, which puts her in a precarious position. When the vampire council in Shreveport calls her to duty, she has to answer.

This time, a nest in Dallas is missing a member, and a radical anti-vampire religious group is suspected of kidnapping him. Sookie's psychic abilities have been loaned to the group to help track down their brother.
To make matters more complicated, the murder of a friend back home also remains unsolved - and Sookie is about to find out firsthand about one of Bon Temps' dark secrets.

Harris is a prolific mystery writer, but "Living Dead in Dallas" is only her second foray into vampire fiction. The first, "Dead Until Dark," was also set in Bon Temps. If Harris wants to take this direction in the future, she's off to a promising start.

The most impressive thing about this novel is the detail. Though she lives in Arkansas, Harris will make you believe she lives here. She's very familiar with the culture of northern Louisiana, and it shows. From the erratic weather patterns to the area's obsession with high school football, Harris makes Bon Temps feel like a very real place, somewhere you could pass through on a Sunday drive.

The book is littered with recognizable things from the real world. For example, the Monroe Symphony may or may not be happy to know that Sookie's vampire boyfriend Bill attends their concerts.
Aside from that, though, "Living Dead in Dallas" is also an entertaining read. The book is fast-paced, and the story line is intriguing.

Harris has given her readers a lively romp through a fantasy land that's grounded in the real world, a world readers in this area will know well. Think Laurell K. Hamilton with a Southern accent.