Review: "A Caress of Twilight" by Laurell K. Hamilton 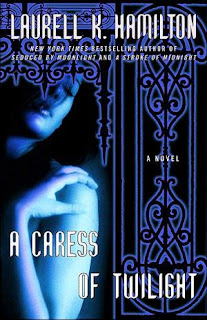 No matter how many people jump on the supernatural detective bandwagon, there's still only one Laurell K. Hamilton. She proves that again in her latest "A Caress of Twilight" (Ballantine).
Merry Gentry - also known as Princess Meredith NicEssus at the Unseelie Court - has returned to Los Angeles and her job at the Grey Detective Agency with a contingent of bodyguards chosen from the Queen's Ravens to protect her. These protectors also have a chance to become kings - if they can provide her with a child.
After years of hiding from her sidhe cousins, Merry has been welcomed back by Queen Andais - and named heir to the Unseelie throne. The catch is that she has to conceive an heir before her cousin Cel, who is currently undergoing six months of torture for an attempt on Merry's life. If she doesn't, the mad Cel takes the throne.
But there are those at the sidhe court that are unhappy with either choice. They want a war between the Seelie and Unseelie courts and are doing their best to start it.
"A Caress of Twilight" is the sequel to Hamilton's outstanding "A Kiss of Shadows." Though it doesn't quite live up to the first book, it's still a top-notch novel, with a perfect blend of fantasy, horror and mystery.

Overall, this book feels like a bridge from "A Kiss of Shadows" to whatever comes next. The reader receives a lot of information and a lot of plot elements are set up, but there's clearly more and better yet to come.

"A Caress of Twilight" starts slow, perhaps focusing a bit too much on Merry's sexual exploits. These scenes are not for the easily offended. But Hamilton deftly uses them to increase the tension within the ranks of Merry's defenders as the threats around them build.

When the Grey Agency gets a call from Hollywood's "Golden Goddess" Maeve Reed - exiled by the Seelie court for an insult to King Taranis - business begins to pick up.

When she receives an unlikely invitation from the Seelie king, Merry finds herself once again enmeshed in the Machiavellian world of sidhe politics. This is where Hamilton really shines, twisting the plot in knots that the reader fears will surely ensnare the heroine.

Hamilton also has the uncanny ability to take creatures of fantasy and make them seem like a living, breathing reality in our own world. Not once does the reader question the appearance of faeries, goblins or other creatures on the streets of Los Angeles.

But the true power of this book is in the author's style. Hamilton's writing is darker and more seductive than any of the characters she's created, and the story will stay in your head long after you've put the book down.
Posted by Fred Phillips at 1:55 PM
Labels: Book reviews, Detective, Fae, Fantasy, Laurell K. Hamilton, Magic, Merry Gentry, Urban Fantasy