Review: "The Hobbit: An Illustrated Edition of the Fantasy Classic" by J.R.R. Tolkien, et al 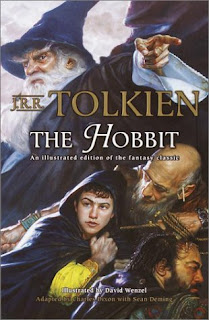 With the first movie in "The Lord of the Rings" trilogy due out in December, the rush is on. People will probably get sick of seeing the name J.R.R. Tolkien under my byline between now and then, but it's a subject near and dear to me.

One of the first entries in the Tolkien bonanza is "The Hobbit: An Illustrated Edition of the Fantasy Classic" from Del Rey. The adaptation, in graphic novel format, is illustrated by David Wenzel and adapted by Charles Dixon and Sean Deming.

I'm always a little leary of any adaptation of Tolkien. His work has been abused quite often, and it always leaves me furious. I once saw a stage production of "The Hobbit" in which Bilbo Baggins struck down the dragon Smaug with his short sword Sting, something that seems ridiculous to any devoted Tolkien-ite. And I don't have to tell any fan of "The Lord of the Rings" about the disastrous cartoon adaptations of the books.

Every now and then, I get a pleasant surprise, though. Wenzel, Dixon and Deming follow Tolkien's vision closely, while adding an appealing visual dimension to the story.

The first thing I noticed about this book was the gorgeous cover by Donato Giancola. His rendering of Gandalf shows the imperious wizard I imagined on first reading "The Hobbit." His vision of Bilbo is one of the more realistic I've seen - even more so than the slightly bulbous-nosed rendering of the hobbit inside.

But that's not to take anything away from Wenzel's artwork. Wenzel strikes a delicate balance between classic comic book art and the more somber works of artists known for their interpretations of Tolkien's world, like Alan Lee and John Howe.

More impressively, though, Wenzel does something that's very tough - and that is to draw characters that are recognizable from the image in the reader's mind. While the Bilbo, Gandalf and Thorin Oakenshield of my mind aren't exactly the ones that Wenzel put on paper, they're close.

By the very nature of the graphic novel format, though, there are weaknesses in this offering. One thing that makes Tolkien's work so appealing is the language - not just the language of the narrative, but the songs and legends as well. This book gives the reader snippets of some of the more important songs, but most of that is lost.

The book also seems a little rushed. Again, that's probably due to the format. The graphic novel calls for near-constant action, otherwise the art component would get a little boring. "The Hobbit" loses a little of its charm in the transition, but it keeps enough of it to satisfy Tolkien fans.

All in all, the strengths of this adaptation far outweigh the weaknesses. It will be a welcome addition to any Tolkien fan's collection.