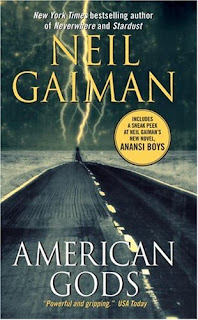 A storm is coming, and its name is Neil Gaiman.

Acclaimed for his work on the classic "Sandman" comic, Gaiman has since turned his attention to novels - and he just keeps getting better.

"American Gods" (William Morrow) is easily his most ambitious book so far, and it firmly establishes him as one of the best fantasists in the business.

Shadow is a man that made a mistake - one he's spent three years paying for. As his parole hearing approaches, Shadow wants only to put the experience behind him, to return to his wife and his old life. But those dreams are shattered when he's released a few days early - to attend his wife's funeral.

On his way home, he meets a man named Wednesday who offers him a job as a bodyguard. His mysterious employer soon reveals himself as Odin, the All-Father of the Norse pantheon, and he begins to lay out Shadow's part in the coming war between the new gods of technology and the old gods who came to America with the first settlers.

Shadow's journey will take him to every corner of the country and some places that perhaps mortals shouldn't tread.

"American Gods" is a bit darker and grittier than any of Gaiman's previous novels, and it's definitely the most far-reaching. The book tackles some serious social issues as it entertains, making some pointed statements about spirituality and morality in America.

At the same time, Gaiman manages to address those issues without being heavy-handed or judgmental. For the most part, he leaves the reader to draw his own conclusions as he concentrates on spinning a gripping tale of adventure.

While perhaps a bit more serious than his other novels, "American Gods" still has a flair that's uniquely Gaiman. It's filled with a colorful cast of over-the-top characters, and the whole story has a fairy-tale feel to it. That's what Gaiman does best, and he's in top form here.

Another interesting aspect of "American Gods" is Gaiman's interpretation of the "old gods." He takes the reader's vague concept of mythological gods and turns them into believable characters that the reader can identify with. He also sprinkles legendary figures from King Arthur to Johnny Appleseed in cameos throughout the book.

"American Gods" shows Neil Gaiman stretching his creative muscles and the results are fantastic, delivering a solid story now and a great promise for the future.