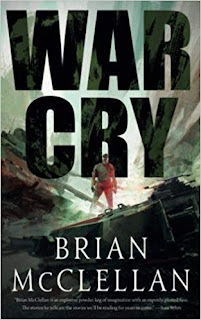 They’ve survived mainly on the strength of their resourcefulness and an illusionist that can disguise their base and movements. Then their pilot, one of the last left on their side as far as they know, learns of a possible supply score. It’s a big risk, but they have to take it, and it may finally change the course of the war.

This is a 95-page novella, but it really didn’t feel like it. I blew through it in no time and was left wanting more. I immediately felt at home among this group. There’s a warmth and camaraderie despite their situation that comes through from the first pages of the story.

The world in which it’s set is a fascinating one, with a generation of people who have known nothing but war, yet still some of them hold hope for better things. That, I believe, is why it’s not the shape-shifter Teado, who is the focal character of the book, that I felt most drawn toward, but the illusionist, or Smiling Tom, Bellara. Amidst the grim surroundings, she dreams of using her gifts for something other survival, bringing a bit of happiness to a world that has forgotten it.

A lot happens in the short pages of this tale, and it will keep you on the edge of your seat. The story is action-packed and intense, but goes by very quickly without a lot of development of what is an incredible idea. Here’s hoping that this is just the introduction, and there are more -- and longer -- explorations of this world to come.