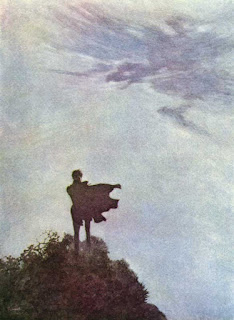 I thought it only fitting that I celebrate Edgar Allan Poe's birthday by sharing some thoughts on my favorite poem, not just by Poe, but by anyone.

By the time I was in junior high, I was pretty well familiar with most of Poe's work. I had several collections that touted themselves as "complete," including a leatherbound volume that was the pride of my bookshelf at the time. Still, every time I got an American literature textbook in school, I went immediately to Poe, hoping to find something new. Eventually, I did, and it was a piece that spoke to me like no other piece of poetry had before or has since.

"Alone" is, in equal parts, melancholic, majestic and sinister. It appealed to the weird teenager who discovered it, and though the weird adult I am now is quite a bit different than that kid, it still hits very close to home.

Since I'm really not very good at talking about poetry, I'll just let it speak for itself:


Alone
From childhood’s hour I have not been
As others were—I have not seen
As others saw—I could not bring
My passions from a common spring—
From the same source I have not taken
My sorrow—I could not awaken
My heart to joy at the same tone—
And all I lov’d—I lov’d alone—
Then—in my childhood—in the dawn
Of a most stormy life—was drawn
From ev’ry depth of good and ill
The mystery which binds me still—
From the torrent, or the fountain—
From the red cliff of the mountain—
From the sun that ’round me roll’d
In its autumn tint of gold—
From the lightning in the sky
As it pass’d me flying by—
From the thunder, and the storm—
And the cloud that took the form
(When the rest of Heaven was blue)
Of a demon in my view—