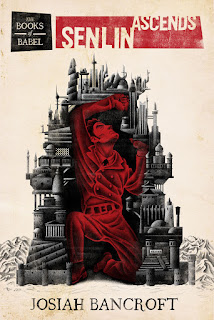 The story begins with a small-town teacher, Thomas Senlin, headed off on a great adventure with his new wife Marya. Senlin has always been fascinated by the great Tower of Babel, which looms over the landscape of his world. It’s a massive structure with each level being its own kingdom, or ringdom, as they’re called. No one is sure how many there are, and each is full of wonders. Or so the handy guidebook that he’s studied tells him.

On his arrival at the base of the tower, though, he first learns things may not be as he’s been led to believe. The sheer mass of humanity gathered there is stunning and frightening. Senlin’s guide offers three rules for dealing with the market – keep your money close, don’t give in to beggars and keep your companions always in view. He breaks two of them almost immediately, resulting in the loss of his wife in the crowd and the beginning of his quest up through the levels of the tower to find her.

“Senlin Ascends” is a genre-bending sort of story that’s an interesting read on many different levels. Bancroft calls it a fantasy, and at heart, it is. But it’s also, by turns, steampunk, romance, a caper, a tale of betrayal, a thriller, perhaps a little bit of horror and a swashbuckling good adventure story. As Senlin discovers and explores the different levels of the tower, the tone and direction of the book evolves and changes with his experiences.

Though Bancroft’s story tends toward the grim side, I couldn’t help but think of Terry Pratchett as I read it. There’s a certain sense of whimsy and humor, even in some of the darker moments and revelations in the book that put me in mind of the late legend. The same goes for the colorful cast of characters that Senlin meets in the Tower, some of them seeming, at first, quite absurd, and none of them ever turning out to be quite what they seem.

Then, of course, there’s the central character of the book – the Tower itself – which shapes the stories and personalities of every other character that Senlin encounters. Though the schoolteacher learns through painful experience that none of its inhabitants can be trusted, the Tower itself is far more sinister and holds more secrets than anyone in it.

Bancroft creates a sense of wonder and fascination that, quite frankly, I don’t often experience anymore. It’s a truly transporting tale that sucked me in right from the first page, even though I didn’t think it would. I finished the last page of “Senlin Ascends” feeling, honestly, a little stunned, but more than ready for a return trip to the Tower of Babel.