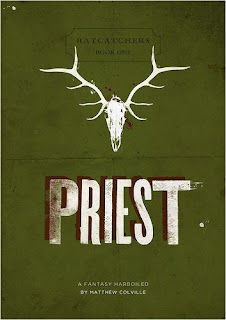 The second book in my journey through the Self Published Fantasy Blog Off finalists was enjoyable, but not quite as compelling as my first read.
In “Priest,” Matthew Colville introduces us to Heden, a sort of warrior priest.

Heden is sent by the bishop of his church to investigate a murder among a reclusive order of knights. The knights should be protecting a nearby city that is threatened by an army of urqs (read orcs), but they’re frozen and guilt-ridden by the death of their captain. Heden must try to unravel what happened and get the order back on track to have any chance to save the people.

“Priest” moves along at a very fast pace. In the early going, though, you can almost hear the dice tumbling in the background. I kind of cringed every time Colville used the word “campaigner” because it gave me more of the D&D feel. I’m a former gamer, but I really don’t like my books to feel like the storyline of a campaign.

The character of Heden, though, and the mystery of the Green Order, kept me interested and turning pages.

Then the book hit its first major snag for me. Near the midpoint, there is a collision of head scratchers that nearly made me put the book down. First, one of the squires of the Green Order, a devout young woman who, to that point, seems only interested in becoming a knight, for no apparent reason, forsakes her vows and throws herself at Heden.

More troubling to me was the attitude that Heden took toward it even before it happened that that sort of thing happened to him all the time, and basically, that it’s inevitable to be around women and water without some sex breaking out. His thought sequence directly prior to the scene kind of undermines the character that Colville has built to that point, and I also really felt like the book crossed over into another sort of fantasy for a few pages.

Later in that same scene, as they’re attacked, the young squire still naked, Heden unleashes a sword with a power so incredible that it was impossible for me to maintain my suspension of disbelief. I had the same question as the young squire, who asked him why he needed to bother with the knights when he could just destroy the urq army with his magic sword. Heden offers an explanation, but it’s not a satisfying one.

I pushed through those scenes, though, and Colville soon got back on point as he continued to explore the mystery of the commander’s death. Ultimately, I thought the book was good, not great.

Female characters get short shrift here, so much so that I can’t even remember their names as I write this review. They act more as props than characters. The young squire, despite seemingly having an interesting story that could be developed, is only there to challenge Heden’s faith before disappearing completely from the story, while the young prostitute that Heden saves from a prison early in the story seems only there to prove his virtue. Of course, the same could be said of many of the male characters, who seem to have a grain of a good story about them, but Heden is really the only character with any development.

So, maybe in retrospect, I didn’t like this book as well as I thought I did when I was reading. But if that’s the case, it’s all the more frustrating because there are the seeds of a very good story in it, I just don’t think it was developed as well as it could have been.

I really liked Heden, and obviously, there were elements of the book that compelled me enough to keep me reading, and that’s tough to do these days. I also remain interested enough that I’ll probably pick up the next volume to see where it goes. Hopefully, we’ll get a little more development and some of the more interesting characters that got pushed to the side can get their due.