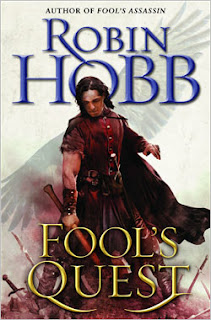 In her second installment of The Fitz and the Fool, “Fool’s Quest” ($28, Del Rey), Robin Hobb surprisingly keeps the same deliberate pace she set in the first volume.

Though at the end of “Fool’s Assassin,” the action seemed poised to ratchet up, Fitz spends much of the second volume dithering, second-guessing himself and hesitating. Despite that, though, the book still manages to be compelling.

We pick up where the first volume left off. Withywoods has been attacked while Fitz is away at Buckkeep tending the Fool, who he himself had seriously wounded at the end of the first volume. His daughter, Bee, has been taken, though Fitz is unaware of that as the book begins.

The Fool continues to try to push Fitz toward his mission of vengeance and destruction against those who tortured and broke him, while at the same time, family and friends are trying to push Fitz toward taking a more public role in court. Revelations are made, Fitz tortures himself as he’s wont to do, and Bee’s fate, and perhaps the fate of much more, stands in the balance.

As I said to start, “Fool’s Quest” moves at a very slow and deliberate pace. This older, more thoughtful version of FitzChivalry Farseer is a far cry from the young assassin we met so long ago who would have long since packed the tools of his trade and headed off after his daughter. Though he does, at least in a couple of instances, show flashes of that young man, at times he’s frustratingly different, seeming to lack any urgency about finding or avenging his daughter.

We see shades of him becoming more like his mentor, and on occasion, perhaps, a little role reversal with Chade becoming the more impatient one. And speaking of Chade, though he takes an interesting turn in the book, which I won’t reveal, I still don’t believe for a second that everything is as it seems with the old spider.

Fans of the previous books in the series will enjoy the fact that, while Fitz seemingly dithers at Buckkeep, many lingering questions from previous books are answered or wrapped up. This series certainly begins to take on the feel of a final goodbye to Fitz and his supporting cast.

Looking back over what I’ve written, it may seem to some that I didn’t like the book very much, but that’s not the case at all. In fact, I was quite wrapped in the story. Hobb has a way of pulling me in that no other writer has ever quite been able to accomplish with a self-flagellating character like Fitz. There’s a very interesting dynamic in that part of me wants to tell him to buck up and get on with it, but another part really identifies with the things he puts himself through. Maybe that says more about me than the character. I’m not sure.

Either way, Fitz’s story continues to compel me, and he continues to be one of my favorite fictional characters. If this is truly a goodbye, I hope that the story goes out with a bang in the final volume.

Posted by Fred Phillips at 10:35 AM
Labels: Assassins, Book reviews, Dragons, Fantasy, Magic, Robin Hobb, The Fitz and the Fool