Review: "Veil of the Deserters" by Jeff Salyards 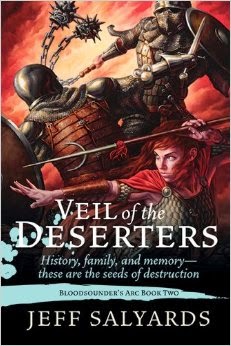 I was intrigued by the first book in the series, “Scourge of the Betrayer,” and the way that Salyards slowly doled out information to our viewpoint character, the scribe Arki. In this volume, Arki has gained more confidence from his commander Braylar Killcoin and the other soldiers and isn’t quite as in the dark.

In the midst of a plot to cause chaos in a neighboring kingdom, Braylar and his Syldoon warriors receive surprising visitors. A pair of Memoridons – memory witches – arrive to order the company back to their homeland in the name of the new emperor.

One of the Memoridons, Soffjian, just happens to be Braylar’s sister, but the reunion is not a happy one. The siblings are uneasy in each other’s company at best, and openly hostile toward each other at worst. Unfortunately, Soffjian may be Braylar’s only hope for surviving his cursed flail Bloodsounder.

Though he disagrees with Emperor Cynead, Braylar has no choice but to follow the command and return home with his sister. But before he goes, he has one little bit of business to finish.

Though we get more of a clue about what’s going on in “Veil of the Deserters,” it doesn’t come right away. Salyards continues to lay a trail of breadcrumbs, and it’s not until Arki actually begins to explore the documents that Braylar and his company are carting around that we begin to see the larger plot unfold. But fear not, there are still surprises coming.

At the end of “Scourge of the Betrayer,” I wasn’t quite sure what to think about the way that Salyards structured that tale. Having finished “Veil of the Deserters,” I’m liking it much more. While I’m now pretty clear on what Braylar’s mission was and is, the story still feels a lot more open-ended than many fantasy tales. I think, in that respect, the veil of mystery and slow release of information worked very well.

The reader also begins to form more bonds with the characters beyond Arki in the second volume. As they accept the scribe and begin to interact with him more, we learn some often surprising things about the seemingly rough men of the company, and we also begin to unravel the details of the violent and callous culture that created them.

Consider me a convert. I was intrigued but not convinced by “Scourge of the Betrayer,” but “Veil of the Deserters” delivered the payoff for the setup of the first volume. I can’t wait to see what comes in the third volume, “Chains of the Heretic,” due out in November 2015.

Wait, you mean I’ve got to wait almost another year to read it? Aaargh.

Couldn't agree more. I liked the first one, but I felt it had a few weak aspects. This one delivered everything I wanted. Can't wait for the conclusion.