Review: "Scourge of the Betrayer" by Jeff Salyards 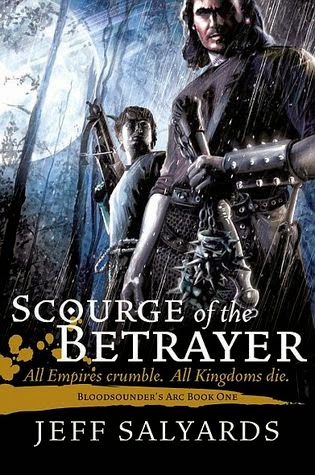 When I was about 20 pages into Jeff Salyards’ “Scourge of the Betrayer” ($14.99, Night Shade Books), it seemed like a book I might abandon. After reading the final page of the story, I’m still kind of wondering how I feel about it. If nothing else, it’s an interesting approach to storytelling.

We view the action through the eyes of Arkamondos, a scribe that has been hired by a group of savage Syldoon warriors to chronicle their actions. Arki isn’t sure exactly why these rough-edged soldiers need a chronicler, and he knows nothing about what their mission is or where they might be headed. He knows, though, that it won’t be dull. And he’s right about that.

That’s really about the best that I can do for a plot synopsis. Any other details that I let you in on would kind of spoil the way that the book is set up, and that’s something I try hard not to do.

In the early going, it may seem that “Scourge of the Betrayer” isn’t really going anywhere. Stick with it, though. Salyards takes a very deliberate approach that keeps the reader as much in the dark as the viewpoint character Arki.

Even three-quarters of the way into the book, we’re still unsure just what the heck is going on. Braylar, the leader of the Syldoon, doles out as little information as possible only when he believes Arki needs it, which means of course, we get the same lack of enlightenment. For a time, it’s a bit like the fantasy version of a road trip story, albeit a dark, ugly and violent road trip.

But I discovered that was one of the things that kept me going. It was a bit like a mystery inside of a military fantasy story. You know there’s a game afoot, but you don’t have any idea what the game is, who the players are or even where it’s being played. I was, by the time I started piecing some things together, determined to figure it out.

As we near the end of the book, things will start to become more clear … well, at least a little bit. Observant readers will probably follow the breadcrumbs to some conclusions before Arki reaches them.

While we end with at least a vague idea of what’s going on, there’s still so much that we don’t know. That said, I found Salyards’ writing style engaging and there are a few gut-wrenching scenes toward the end that made a big impact on me.

“Scourge of the Betrayer” won’t be for everyone. It’s a bit of a different approach to storytelling than most of us are used to, and that alone makes it worth giving a shot.