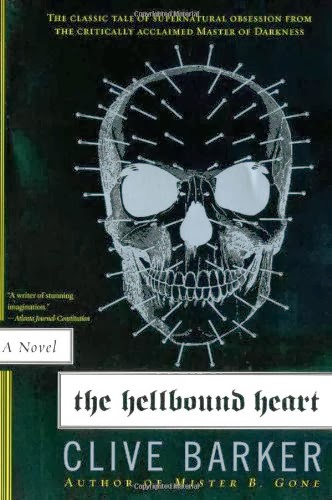 Clive Barker's "The Hellbound Heart" ($11.99, Harper Perennial) represents a little unfinished business for me. You see, I'm a big fan of Barker, and I'm a big fan of the Hellraiser movies, at least the early ones, but I've never read the novella they were based on until now.

If you're familiar with the movie, you know the basic story. Unhappily married couple -- Rory and Julia -- moves into an inherited house and soon discovers that the husband's ne'er-do-well brother Frank is still in residence, sort of. He discovered a puzzle box, which opened a door that allowed a group of creatures known as the Cenobites to take him away for brutal torture. Now he needs Julia to help him restore himself and escape.

The movie and novella follow each other pretty much blow-by-blow. There are a few deviations in the movie, but in broad strokes it's the same. For the most part, it's one of those rare tales where I believe that I prefer the movie. I think I like the ending of the novella better, but the Cenobites, really, were made for the visual.


Those creatures, including the now-iconic Pinhead, are really sort of bit players in the story, not the ominous presences that they become on the screen. The true monsters in Barker's story are actually Frank and Julia.

While I enjoyed the story, and it's about time that I got around to reading it, I don't believe that it's one of Barker's best works. Perhaps its because I've seen the film so many times, but it seems to me that this story was almost written to become a movie.

An interesting side-note to the films, for sure. If it had been included in the Books of Blood anthologies, I think I would have looked at it differently.

I think the depiction of Pinhead was the biggest surprise for me.