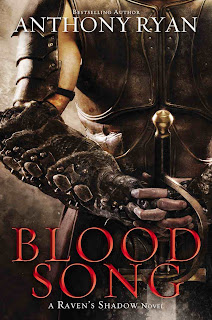 Every now and then a book just sneaks up on you. You start the tale thinking it's not bad, and at the end, you're left sitting, staring at the last page, thinking "wow." That's what happened to me with Anthony Ryan's "Blood Song" ($27.95, Ace).

Vaelin al Sorna, known to his enemies as the Hope Killer for reasons you'll discover in the story, is on his way to a battle to the death arranged by two lands that seek vengeance against either Vaelin or his family. His only companion on the journey is a scribe that detests him. Still he listens as Vaelin lays out his tale.

Born to a life of promise, Vaelin al Sorna was the son of the Battle Lord of King Janus. For reasons that the boy doesn't quite understand, his father gives him over to the Sixth Order, one of the divisions of his realm's religion, the Faith. The Sixth Order dedicates itself to defending the Faith through force, and with grueling and harsh training, Vaelin finds himself transformed into a warrior, one of the finest the order has ever seen, and bonded with a new family, his brothers in arms.


But through his own charity and guilt, Vaelin eventually finds himself ensnared in the plans of King Janus, as well as privy to one of the Faith's most closely-guarded secrets. Both set him on a path that will certainly change him and may well change the world.

The comparison to Patrick Rothfuss' "The Name of the Wind" will be obvious and hard for Ryan to avoid. The two use very similar conventions. There's a famed hero telling his story to a scribe, with an immediate story line that gets put on the backburner for the tale of the hero's past. Both spin a gritty coming-of-age yarn that shows the things that molded the man into what he became.

Ryan, though, is a bit more succinct than Rothfuss. While we're still reading about Kvothe's youth in Rothfuss' second book, by the end of "Blood Song," we know much, though not quite all, of what there is to know about Vaelin's past, and we're left quite intrigued by his future.

Ryan's approach is somewhat unique in the current realm of epic fantasy in that he pretty much wraps up the two primary story lines presented in the beginning of the book by the end. Oh, don't worry, there are still plenty of questions lingering and plenty of territory to explore in future volumes, but you don't feel left hanging, wondering if it will be one year or 10 before you get to read the next volume.

Vaelin gives us an interesting character to travel with for the book's 600 pages as he goes from being a frightened and uncertain boy to a cold-hearted killer to a confident man that does what he knows he must. He's flawed and torn between his beliefs and what he has to do, but he's not tortured about it.

The supporting cast is colorful and likable as well, at least through Vaelin's eyes which is mostly how we see them. Some, of course, are shadowy, hard to pin down and full of secrets. I wouldn't have it any other way.

Ryan has a knack for creating breathless passages of action that make you not want to put the book down, but he also loads the book with little tidbits and notes that may not seem like much at the time, but will later give you those "a-ha" moments that I love.

And the final chapter? Well, without giving anything away, there was just something about it that brought the story home for me. When I got to the final sentence, I was left for a few moments staring at the page and wishing that I had the next volume in hand immediately. The follow-up has just moved to the top of my (hopefully) July 2014 reading list.