Review: "Grimoire of the Lamb" by Kevin Hearne 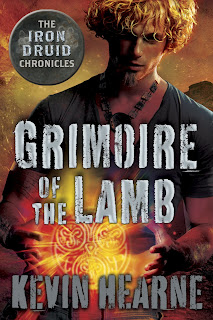 With book six of the Iron Druid Chronicles, “Hunted,” due out later this month, Kevin Hearne treats us to a quick story from Atticus O’Sullivan’s past with “Grimoire of the Lamb” ($2.99, Del Rey).

The story begins with Atticus receiving a call about an ancient Egyptian cookbook that he has in his collection. It’s one of the more innocuous-seeming books that he rescued from the Library of Alexandria before its destruction. Most contain powerful magic and dark spells, but this one seems only to have recipes for lamb. Intrigued, Atticus demands that his Egyptian caller come to the U.S. to meet him in person and negotiate the price of the book.

As it turns out, the book, which Atticus has nicknamed the “Grimoire of the Lamb,” contains much darker secrets than what’s for dinner. When the mysterious buyer snatches the book and defeats Atticus’ magical attempts to stop him, the druid finds himself in Egypt and facing the power of more than one ancient god.

For those keeping up with the story, “Grimoire of the Lamb” is at first a little jarring. It jumps back to the very beginnings of Atticus’ adventures – well, at least the ones that Hearne has written about. Unlike last year’s “Two Ravens and One Crow,” this tale doesn’t make a large impact on the current storyline – at least not yet – but it gives us our first close look at the Egyptian gods of Hearne’s world, which he hasn’t dealt with much to this point. Turns out, Atticus doesn’t have many friends in that pantheon, either.

The novella is a fun, quick read that, in a way, takes the series back to its lighter-hearted roots with a fast pace and some fun from Oberon. I thoroughly enjoyed the tale, but I’m much more interested in the full-length that’s coming up in a few weeks.