Review: "Dead Ever After," by Charlaine Harris 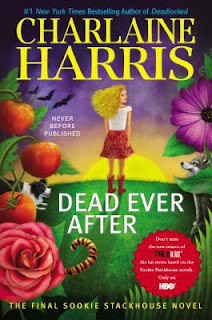 So far, 2013 has brought the end of two long-running series that I’ve had mixed feelings about. Granted, I didn’t live with Charlaine Harris’ Southern Vampire series quite as long as the Wheel of Time, but “Dead Ever After” ($27.95 , Ace) also didn’t give me quite as satisfying an ending.

Last year’s “Deadlocked” pleased me in that it seemed that Harris’ story was finally clicking back into place after being lost in the wilderness for a while. I thought that she’d gotten caught up a little bit in the longer contract and the “True Blood” phenomenon and was stretching to keep the story alive. I said in my review of that book that I almost felt the click, when it got back to the story that she’d planned, and I was hoping for a big bang of a finale with this one. Instead, I found it disappointing.

Sookie’s relationships are struggling after the closing events of “Deadlocked.” She’s on the rocks with Eric, who is not communicating with her after she saved Sam’s life, and Sam hasn’t been as grateful as she believes he should be. Meanwhile, other forces are moving against Sookie.  As she tries to bring her life back to some semblance of normal, Arlene Fowler, freshly out of jail, walks into Merlotte’s asking for her job back. Naturally, Sookie refuses and Arlene leaves in a very public huff.

The next day, guess who Sam finds in the dumpster at the back of the bar? Yep. Arlene. And she’s been strangled with one of Sookie’s scarves. That launches a story that should have Sookie fighting for her freedom and her life, with a few surprises along the way.

Harris uses this book as an opportunity to reintroduce quite a few characters that have disappeared from the series, some of whom really don’t seem to have any reason to be there other than simply being seen and some of whom we really didn’t care about seeing again anyway.

That’s the main problem that I have with “Dead Ever After” – it seems very contrived from the plot, to the character appearances to the rush to wrap up loose ends. True enough, Harris’ books have never been about depth. They’ve always been more quick, fun reads, but this book in particular seems to breeze past some crucial plot points and everything is wrapped up much more easily than it probably should be. I never had any real feeling that Sookie was in danger of being locked away for the murder of Arlene, and though there were some moments that I felt tension and suspense in the other aspects of the story, I never really thought things might end badly.

Sookie’s relationship issues were even less interesting to me, and also wrapped up far too easily and quickly without much tension or struggle. I actually laughed during the “big love scene” near the end, but for the wrong reasons, not because of the joke that Harris wrote into it.

For a series that started out with so much enjoyment for me, it ends on a down note. Maybe I expected too much from the “big finale,” but it reads to me more like one of those struggling middle books that just happens to tie most everything up.

I still think the early books in this series are great, but between Alan Ball’s abomination and what Harris herself has done to the series in the later books – and I do believe the two things are related – I’d be hard-pressed to recommend it to anyone who isn’t already involved.