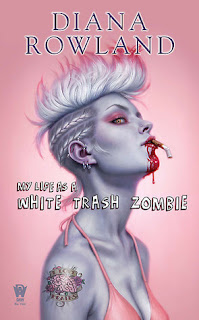 When she goes to work, things get really strange. Normally weak-stomached, Angel is not bothered at all by autopsies in progress, but when the skulls are cracked open, she feels a strange desire to eat the brains. Paired with that, she gets another note from her benefactor telling her it’s OK and urging her to eat whatever she wants.

That’s how she discovers that she’s been turned into a zombie, which comes with both its advantages and its headaches. A good meal of brains gives her more strength and energy, but, of course, you have to find a steady diet of them. That’s where her job at the coroner’s office comes in. She knows very little about her condition, and tries to learn from a few other zombies she discovers in the area, but they’re not very forthcoming. To complicate matters, there have been a string of gruesome murders where the victims are found with heads missing or bashed in, that Angel suspects are being committed by others like her.

Rowland offers up a quite different take on the zombie. Her creatures are not the shambling, rotting corpses that we’re most familiar with, though they can certainly get that way if they don’t get enough brains. A steady diet keeps them looking, acting and, most importantly, smelling just like other people so that they can pass in everyday life.

Much like Hearne’s first few books, “My Life as a White Trash Zombie” is a light-hearted and fast-paced read. It definitely has its darker moments, but more often than not, you’ll  have a smile on your face. Who knew zombies could be so much fun?