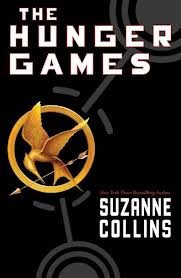 I could probably skip reviewing “The Hunger Games” by Suzanne Collins ($10.99, Scholastic) because I feel like I’m probably one of only a handful of people out there who haven’t read it or seen the movie.

Maybe it’s just my contrarian nature coming out, but I’ve avoided the book while people around me raved about it. But after finishing the final volume of the Wheel of Time, I was looking for something a little shorter and less epic to wind down, and this book kept coming up on my Nook.

At first, I thought I was going to be a little disappointed with the story, but by the time the games began, I was riveted.

For the one other person out there that doesn’t know the plot besides me, the book focuses on Katniss Everdeen, a girl from District 12 of Panem. It’s set in a post-apocalyptic United States, where there are 12 districts under the bootheel of the Capitol, which is located somewhere in the Rockies.
There used to be 13 districts, but the last one was destroyed by the Capitol after an uprising. That’s also led to the subject of the title, the Hunger Games. Each year, there is a lottery where one girl and one boy are chosen to compete in the Hunger Games, a battle to the death with one victor who is honored and brings honor to his or her district. It serves as a reminder to the people that the Capitol is in control of their lives, as well as a grand entertainment for the people in the Capitol.

Each district has its own specialty – Katniss’ home in District 12 is in the Appalachians and provides coal for the Capitol – and most are poor. So winning the games is quite the honor, despite their horrific nature. It’s been a long time since District 12 had a winner because some of the richer districts have players who are trained – against the rules – almost from birth to compete. Katniss is already a bit of a rebel, sneaking under the sometimes-electrified fence of her district to hunt illegally in the surrounding forest to provide for her mother and younger sister, left alone after her father’s death in a mining accident. Katniss, as we know she must, ends up in the games, where her skills as a hunter will give her an edge, but will they be enough?

As I mentioned earlier, I thought the early parts of the book were a little slow. I was never bored. The situation and set up were interesting and kept me reading, but I wasn’t compelled either. I thought it was going to be a decent YA novel, though it might miss the adult crossover. When the games got into full swing, though, I realized I was wrong about that. The twists and turns once in the arena kept me glued to the page and, by the end, Collins and Katniss had completely won me over.

Katniss is an interesting heroine, conflicted, as she must be, between survival and a victory that could mean great things for her family and district, and the fact that 23 other kids, some as young as 12, will have to die for her to achieve that. Some she’ll even have to kill herself. It’s easy to see  how the seeds of rebellion that she initially had could sprout into something larger in that situation, and indeed, they begin to.

There are, certainly, some underlying social issues tackled in “The Hunger Games.” At its root, it’s about the eternal conflict between the haves and have-nots, which our world will likely never be rid of, and the callous disregard for the lives of others that’s become a rampant problem in our society. It’s fueled by reality TV, which also brings out the worst in people. Ironically, there are reports of a video game being developed based on the book, which just seems completely wrong and seems to fly in the face of the statement Collins is trying to make since it will almost certainly have to focus on the arena angle. But that’s our society and, perhaps, the reason that Collins’ vision doesn’t seem so far-fetched.

As I often do when I avoid these kinds of things, I find myself regretting that I didn’t read it sooner. I’ll certainly be following up with the two sequels in the trilogy soon.