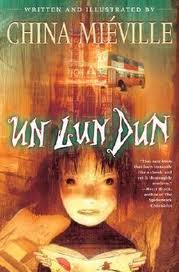 I’ve been told by several of his fans that I just don’t appreciate China Mieville’s genius. I disagree. I’ve tried reading a couple of his books, and I acknowledge that he is an amazing world-builder. I’ve gone through the books marveling at his creations, but at the same time, I’ve always found his style a bit stuffy. It’s created a bit of a conundrum for me. On the one hand, I want to explore his worlds and see more of the things that inhabit them. On the other, I’m kind of bored by the stories.

I was intrigued enough by the description of his recent YA title, “Un Lun Dun” ($9.95, Del Rey), to give Mieville another shot. The description put me in mind of Neil Gaiman’s “Neverwhere,” one of my all-time favorites and a book that Mieville admits in the credits was a huge inspiration for this one. The Dave McKean-esque cover reinforced that.


Zanna and Deeba are best friends in London. They’re normal kids until they start noticing weird things happening around them. Animals are paying strange attention to Zanna and weird strangers begin to approach her. On the night that a walking umbrella – she’ll later discover it’s an unbrella – stalks her, she decides to try to figure out what’s going on. She and Deeba end up in UnLondon, a bizarre alternate London where all of the broken and unused things from the real London seep through, often being used in wildly different ways from their intent in the real world. The characters they meet in UnLondon are even stranger than the landscape, though – a tailor with needles for hair who makes outfits out of books, a half-ghost teenager, a walking milk carton and a talking book, among others.

Zanna soon discovers she’s the “Shwazzy,” a chosen one who is prophesied to defeat the Smog that threatens UnLondon. But things don’t go according to the prophecy’s plans in Zanna’s first meeting with the Smog, and from there, things get turned upside down in a way that I won’t reveal, because it might spoil some of the fun of the read.

Finally, I get it. “Un Lun Dun,” I believe, serves as the perfect vehicle for Mieville’s unbridled creativity. The landscapes and creations that I’ve marveled at in his worlds come alive in this book. The city of UnLondon is just as much a character here as any of the walking, talking ones, and around every corner is some wild, wacky and wonderful new creation.

While there are many dark moments in the story, the tone is a bit more whimsical and playful than in his books intended for adults. I also found the characters here easier to relate to and get behind, perhaps because it was written for a younger audience, and the story kept me wanting to see what would happen next as well as what strange new thing would make an appearance.

There is a flavor of Gaiman’s “Neverwhere” in “Un Lun Dun,” but there’s just as much Lewis Carroll. It’s weird, light and fun, but not frivolous, and it just might inspire me to take another chance on one of Mieville’s “adult” selections.