Armchair QB: Where's Deuce when we need him? 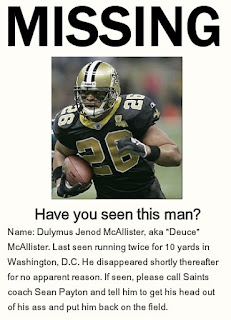 On the sideline for no good reason, apparently. How you can justify leaving Deuce McAllister on the sideline when your run game is anemic, I don't know. I can understand wanting to rest him and make sure he's healthy for the stretch run. But you've got to win to get to the stretch run, and 46 yards from your running backs ain't gonna get you there.

Let's look at it, Reggie Bush had 28 yards on 10 carries. Pierre Thomas had eight on six carries. Deuce touches the ball twice and rips off five yards on each carry, then he's back on the sideline. Even on third and one late in the game, when we were trying to hang on -- no Deuce. In that situation, he's got to be your guy. At the very least, you line him up back there to make the other team think about it. I can't figure it out. Maybe if he'd had more plays, Washington would have shut him down, too, but you can't know that if you don't try.

Admittedly, 1-1 is much better than 0-2, where we were at this point last year, but we should be 2-0. We've been sloppy, with a lot of mental mistakes over the first two weeks. I know our defense was decimated today, but where's that ballyhooed offense?

I know it's early and there's no need for panic, but I'm starting to feel a little of that old aggravation sneak back in.
Posted by Fred Phillips at 10:01 PM
Labels: Saints