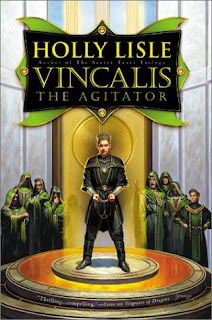 There is always a price for magic, and in Holly Lisle's latest, "Vincalis the Agitator" (Warner Aspect), that price is high indeed.

The Dragons, an elite group of wizards that run the Empire of the Hars Ticlarim, have a problem. They've been converting the bodies of Warreners - people raised in captivity much like cattle - into magical energy to sustain their amazing cities that float in the air or hide beneath the waves. But that energy isn't enough anymore. They need more power, so they turn to a darker fuel source - the burning of souls.

Wraith was born in the Warrens, but for some reason was immune to the magic in the wayfare - drugged food that's pumped to the Warreners to keep them mindless and docile. When he's caught stealing bread in the Aboves, he stumbles into the home Solander Artis, a member of a highly placed Stolti family and son of a member of the Dragon council. Solander is intrigued by Wraith's immunity to magic and offers to free him and his friend Jess from the Warrens in exchange for the opportunity to study him.

Years later, Wraith, now known as Gellas Tomersin, continues his quest to free the Warreners. He produces a number of plays from a mysterious playwright named Vincalis that are intended to make people think about the luxuries they have and how they're powered.

At the same time, Solander is working on a new form of magic that doesn't require the sacrifice of others. But a shadowy group of leaders known as the Silent Inquest knows about their efforts and has decided that they are a threat to the power of the Dragons. Things are about to get ugly.

In "Vincalis," Lisle takes a trip back in time in the world of her popular "Secret Texts" trilogy. The book illuminates the history of the Dragons and the origins of the Falcons and their holy books, the Secret Texts. Aside from the history lesson about the world of Matrin, it's also a very good story and easily accessible to those who may not be familiar with her previous work.

The book was originally planned as a three-book, 600,000-word epic, but was trimmed down through what Lisle calls a "brutal" process. The result is a tightly-plotted, action-packed tale that will take readers on a roller coaster ride of emotions.

Lisle mingles classic fantasy adventure with the feel of a science fiction novel and even mixes in a touch of horror. The book also has some statements to make about political corruption and social segregation. Oh, and don't forget about the Illuminati-like Silent Inquest.

The characters are realistic, sharing the same conflicts that most people deal with, while also striving to change the world. Though their actions are occasionally frustrating, the characters command the sympathy of the reader.

Over the past 10 years, Lisle's work has gotten better with every book, and "Vincalis" continues the trend. I can't wait to see what she has in store for the future.