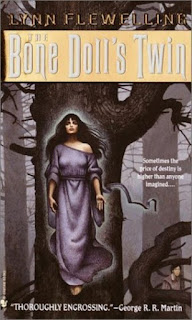 So long as a daughter of Thelatimos' line defends and rules, Skala shall never be subjugated.

The words of the Oracle led to prosperous times for the kingdom of Skala when they were heeded, but that's all changed. Following the death of mad Agnalain, the last queen, her son Erius ascended to the throne - but he proves just as mad, putting all female children of the royal line to death to avoid the prophecy. In the meantime, Skala has suffered droughts, plagues and attacks, and many of the people are beginning to remember the words of the Oracle.

In "The Bone Doll's Twin" (Bantam Spectra), Lynn Flewelling returns to the world of her popular Nightrunner series, but she explores a different side of it - a darker side.

Prince Tobin was born female, but his true identity has been hidden - even from Tobin himself - by a dark spell cast the night he was born. Hidden away from the world and haunted by the spirit of his dead twin brother - murdered at the time of their birth - Tobin is the hope for the small group of co-conspirators that know the truth and hope to bring prosperity back to Skala.

But first Tobin has other issues to deal with. Not the least of which is a crisis of identity.

"The Bone Doll's Twin" shows a maturing in Flewelling's writing. While her previous Nightrunner books were rollicking adventure tales that focused on the exploits of the likeable rogues Seregil and Alec, this one is darker and more somber. While it has its share of adventure, it's more of a coming of age tale. And for obvious reasons, Tobin's coming of age is more complicated than most.

As she did in her previous books, Flewelling pulls issues from our own society into "The Bone Doll's Twin." Gender roles and identity feature prominently in the story line, just as they did in the first Nightrunner novels. They're subjects that Flewelling handles well, and often in thought-provoking ways.

If I can find a complaint with "The Bone Doll's Twin" - and, in truth, I can't - it would be that it's typical of first books in a series. There are a lot of loose ends left hanging, presumably to be resolved later. But those same loose ends also hold a great deal of promise for future volumes.

Flewelling's Nightrunner books are popular among fantasy fans for a very simple reason - they're good. "The Bone Doll's Twin" continues that trend, and I look for her to be a major force in the future of fantasy.