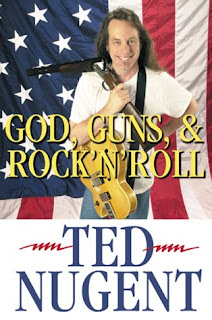 The title and the cover of Ted Nugent's new book tells the reader just about all he needs to know when deciding whether or not to pick it up.

The jacket of "God, Guns & Rock `n' Roll" (Regnery) features Nugent with his Gibson Byrdland slung around his waist, a double-barreled over-and-under shotgun on his shoulder and an American flag in the background. The message is clear: anti-hunters, anti-gunners and anti-rock `n' rollers need not apply.

If the cover doesn't convey that message, then the first few pages will. Nugent loads up the automatic and blasts away at gun control advocates, media portrayal of guns and gun owners, animal rights groups and anything else that gets in his way.

Ted shoots straight and speaks his mind. That may be a little hard to stomach for those that disagree with his views, but for those who do agree with his opinions, it's a refreshing blast. Don't expect any political correctness, double talk or backing down. As Aerosmith guitarist Joe Perry says on the back cover, whether you agree or disagree with him, you know exactly where you stand with Uncle Nuge.

His strong opinions and no compromise attitude have always drawn the ire of his mostly liberal counterparts in the entertainment industry and have even alienated a few of his fellow sportsmen. Ted doesn't care. In response to the fellow hunters and shooters who disapprove of his methods, he compares it to someone rescuing a drowning child and then having the parents throw him back in because they didn't like the way the rescuer swam.

If you pick up "God, Guns & Rock `n' Roll," you'll soon find out that Nugent's highly-publicized views on hunting and the Second Amendment are not the only things he has very strong opinions about. Even the most avid gun control advocate or anti-hunter couldn't disagree with his views on drugs and alcohol. A spokesman for Mothers Against Drunk Driving and an officer in the DARE program, Nugent takes pride in the fact that he has never indulged in drugs and alcohol.

Nugent credits hunting for filling a void that he says others try to fill with drugs and alcohol. He points to a long list of talented entertainers - Jimi Hendrix, Janis Joplin, Jim Morrison, Keith Moon, John Belushi, Bon Scott and others - who have died as a result of drug and alcohol abuse. "They got high, and they're all dead. I went hunting, and I'm still Ted," Nugent writes.

Nugent also has some intriguing thoughts on gun safety. Since the gun has been glorified in television, movies and even music for so long, he reasons there's no way you can keep a child from being fascinated by firearms. The logical approach, according to Ted, is to teach them as much as you can about guns - especially about gun safety.

But once you get past Nugent's activism, you find the real beauty of this book. For a guy who is "just a guitar player," Nugent has the uncanny ability to put the reader next to him on the hunting trail. His vivid descriptions allow the reader to see, hear and smell the same things Nugent does in the woods.

The scenes are ones that will connect deeply with those who enjoy the outdoors. Every hunter will recognize the heart-thumping, pulse-pounding close encounter with his quarry; or the absurdity of laying flat on your back in the mud, one boot-top still sticking out of the muck, but laughing like a madman because you're happy to be alive in the woods; or the keen sense of pride a father feels in a child's display of skills.

Nugent closes with a few stories of his friend and mentor Fred Bear. He tells of how he had to convince Bear that all rock `n' rollers were not "drug-infested anti-hunters," and how the death of Bear inspired the most powerful song Nugent has ever written, the haunting "Fred Bear."

Sandwiched in the middle of the book is a collection of photos, illustrating Nugent's everyday life. It includes numerous photos of his family, a few on-stage photos and a few hunting photos. It also shows him rubbing elbows with everyone from fellow rock `n' rollers to conservative leaders.

If you're a member of PETA or Handgun Control, Inc., you'll probably want to give this book a pass. On the other hand, if you believe in the Second Amendment, the Spirit of the Wild and the power of rock `n' roll, then crank up "Stranglehold" on the stereo, sit back and prepare for some full bluntal Nugety.