Review: "A Kiss of Shadows" by Laurell K. Hamilton 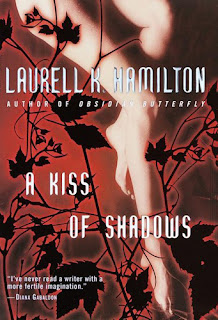 Almost every culture has tales of the folk of Faerie. In the legends, a meeting with the fey can change a person's life - sometimes for better and often for worse. Whether cruel or kind, the fey are usually depicted as reclusive and rarely encountered.

That's not the case in Laurell K. Hamilton's "A Kiss of Shadows" (Ballantine Books). Hamilton envisions a modern world where all you have to do to find the folk of Faerie is walk down the street, and the impact they can have on a human life is very limited.

After President Thomas Jefferson invited the fey to migrate to the United States from Europe, they chose a group of earthen mounds in Illinois for their court - and they have become a public fascination. So much so that often humans alter their appearances to resemble the fey.

Merry Gentry is a parte sidhe, part brownie and part human detective in Los Angeles. She also happens to be Princess Meredith NicEssus, a member of the Unseelie Court hiding from assassins sent by her aunt, Queen Andais. Merry has the double curse of being of mixed heritage and of having little magical power - a combination that makes her a target for her elven cousins.

After hiding successfully for three years, Merry goes undercover to catch a human who is using a forbidden faerie love potion to seduce and rape women. She uncovers an even darker secret - but when the suspect is killed by magic, Merry is arrested and her cover is blown. She soon finds herself on the run again.

While fleeing a group of dark fey known as the Host through the streets of L.A., Merry unleashes a terrible magical power for the first time, stunning her enemies and herself. Instead of ordering her death, the queen invites Merry to return to court and makes her an even more intriguing offer, one which earns her the hatred of the queen's son and once-sole heir Cel. But the price of the queen's "kindness" is high, and if Cel's minions have their way, it could cost Merry her life.

Part fantasy, part hard-boiled detective novel and part gothic horror, "A Kiss of Shadows" is a unique beast. Hamilton has created a fantasy world where magical beings have to handle familiar problems - traffic, delayed flights and paparazzi - while at the same time dealing with magical issues and court intrigue.

She has peopled our own world with fey races both beautiful and horrible, and then made that world real enough to hold the reader's attention. Hamilton does this mainly through a cast of interesting characters. Even her secondary players are intriguing, with distinct personalities and stories to tell.

While this is, in essence, a fairy tale, it's definitely an adult fairy tale. There are a number of graphic scenes during the course of the book, brought on by both the violence and sexual attitudes of fey society. Far from being gratuitous, though, these threads instead seem to weave the story into a more intricate tapestry.

The overall feel and mood of the novel reminds me of Anne Rice's first few vampire novels. But in many ways, Hamilton's vision surpasses Rice's, offering a richer world to be explored.

With "A Kiss of Shadows," Hamilton has managed to avoid most of the clichés of the fantasy genre - and at the same time, she has laid a fertile groundwork for future tales of the sidhe court. This could be one series worth getting involved in.