Review: "Daughter of the Blood" by Anne Bishop 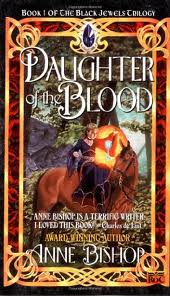 What would it take to turn Hell upside down? How about a young girl who is much more than she seems.

Jaenelle is Witch, a being destined to be more powerful than the High Lord of Hell himself. If, of course, she lives long enough to fulfill her potential.

She is only seven when she's discovered to have the powers of Witch, and her childish antics keep Saetan, the High Lord, and her earthly protector and would be consort, Daemon Sadi, scrambling to keep her safe.

If she were to fall under the control of the wrong people, it would be disastrous. The wrong hands are the vengeful, self-appointed High Priestess of Hell, Hekatah, and her mortal puppet, Dorothea SaDiablo. Both who long to get their hands on the girl, never fully realizing what she is.

Sadi, or the Sadist as he's known in the realm of Hayll, is my kind of character. He's sick, twisted and vicious, but instead of turning the reader off, it's those very things that make you like him so much. We also get a glimpse of a different side, a caring side of him when he's with Jaenelle and her sister Wilhelmina. At first his caring is for her power, but later, it becomes for the girl herself.

In fact, in Bishop's world, the mortals seem more demonic than the demons. Characters like Kartane and Robert Benedict are vile creatures, preying on young witches for their sexual delight and breaking them before they come into their full power. They're repulsive characters and the reader longs for the Sadist to pull their "home for disturbed children" down around their ears.

Bishop has found an interesting blend in this book. Strong characters, including demons and a High Lord of Hell that you can actually care for. I would have liked to see the character of Lucivar developed a little more, though. You can tell he will play a principal role in the future of the series, but he seems almost an aside in this book.

Daughter of the Blood will have you laughing one minute at Jaenelle's antics and revulsed the next by the vile acts of Kartane.

I've read a lot of good first novels lately, but this is by far the best one I've picked up. I'm looking forward to the next volume.